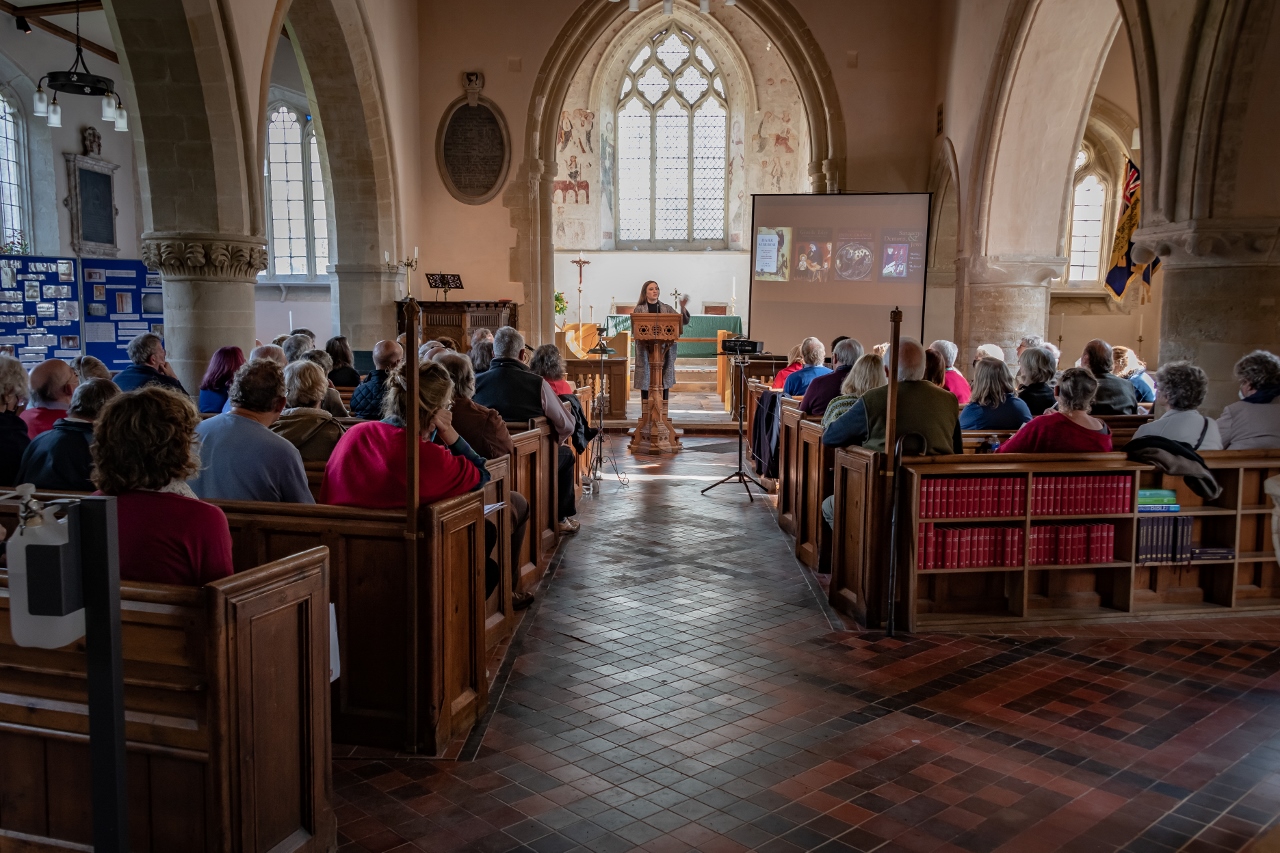 St Mary’s church was filled with enthusiastic delegates for the symposium held on Saturday 16th October, and were rewarded with a day of interesting talks relating to the wall paintings in the church.  After a welcome by the Vicar, Fr Michael, local Actor and history enthusiast took over as our Chairman and introduced our conservator, Madeleine Katkov, who gave a short resume of the process leading to the Symposium following the Conservation and Refurbishment project in the church in 2015 to 2016. She was followed by Russell, who gave a short description of the history leading up to the creation of the paintings in the chancel in the early 14th Century.

Sommer Hallquist, a PhD candidate at Cambridge University, then gave us a presentation outlining some of the findings of her research into the dating, patronage and manuscripts connections of our paintings. Through research into the Episcopal Register of Bishop Dalberby, Bishop of Lincoln, (in which Diocese Chalgrove lay at the time), Sommer has been able to establish that the rebuilding of the chancel of St Mary’s was completed sometime between 1320 and 1325, which is later than previously thought. As the living of the church had been given to the Cistercian Abbey at Thame in 1317 by King Edward II so that they would say masses for the soul of his favourite, Piers Gaveston, who had been murdered by the barons, Thame Abbey would have played a large part in the rebuilding work at Chalgrove church. In 1319 they had appointed, as Vicar at Chalgrove, Simon de Croilland who by name was clearly connected to the prominent Abbey of Crowland in East Anglia, one of the suggested centres of the Fenland Group of illustrated manuscripts from that period. Similarities between some of the manuscript illustrations and paintings at Chalgrove tend to confirm this association.

Sommer then introduced Professor Paul Binski, Emeritus Professor of Medieval Art at Cambridge University, who gave us a fascinating talk about religious art in the early fourteenth century and the place of St Mary’s church paintings in that corpus.

In the absence of Professor Miri Rubin, who was unable to be with us, Sommer then presented some comments on the anti-Jewish sentiment to be found in the Chalgrove Scheme, as provided by Dr Sara Lipton, Professor of History at Stony Brook University.

After the lunch break, Sommer introduced Dr Ellie Pridgeon, Lecturer in History at the Universities of Oxford, Leicester and Cambridge, who gave us another fascinating talk about wall paintings in Oxfordshire, comparing the paintings at South Newington and Widford with our scheme.

Bob Heath-Whyte then gave a brief talk about his efforts to decode the iconography of the leaves or foliage over the window arches in the chancel paintings, and also of the red florets used as a decorative filler throughout the chancel.

Finally Madeleine Katkov talked about her findings of the materials and techniques used in the Chalgrove paintings, including the fact that animal glue was used to mix the pigments.

After a tea break, there was an interesting panel discussion with the speakers fielding questions put by the delegates. Following final comments by the speakers, Fr Michael Lakey brought the symposium to a close with thanks to all for an excellent day.

The Symposium was organised by Sommer Hallquist, Madeleine Katkov and Bob Heath-Whyte, and was sponsored by the James and Lucilla Joll Charitable Trust. Our thanks go to them and to our principal speakers for their generosity. We are also extremely grateful to the following:- Russell Kilmister for acting as Chairman, Jeanette Barrington and her “Four Jays” catering team, Lynn Baker and the Friends of St Mary’s for stewarding, Gill Lester, Rachel Jacques and the Chalgrove Local History Group for providing the Exhibition, Martin Wiggall for acting as Photographer for the day, Andrew Davis and Andy James for looking after the Audio-Visual side of things, and, last but not least, to the Vicar, Fr Michael, and the Parochial Church Council of St Mary’s for allowing us the use of the church. 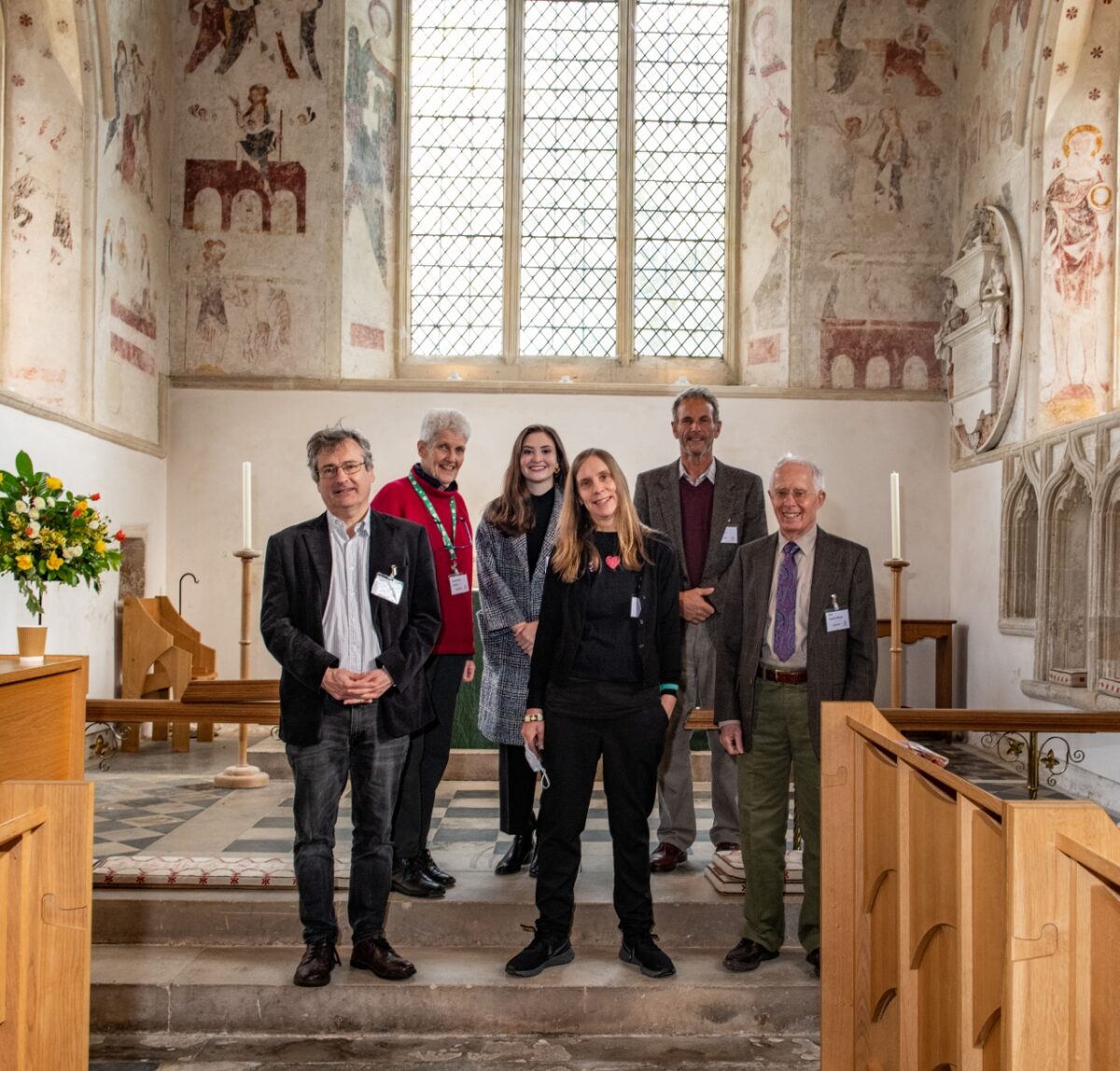